﻿﻿
You know you're doing something pretty drastic when the stylist who was assigned to cut your hair for you refuses!

That's what happened to me, anyways!

﻿
Last Tuesday, after a week of sitting on the idea that I was going to get my hair cut, into a similar style as rocked by the beautiful Kandee Johnson, I booked myself in. Lucky for my broke ass, it was Half Price Tuesday, so I was going to get value out of my €25!!
﻿﻿
I wake pretty early, so I rang at 9.15 and they told me they would have a spot for me at 2.30!! Deadly! So up I got, had a shower, got ready to go out and do my errands that needed doing in the morning, and before I knew it, it was 1.15 and time to walk into the village to get my hair cut. I was beyond early, so I wandered around the two chemists in Enfield and tried to kill some time!

When I did eventually make it into the hairdressers chair, my noggin all dripping and smelling of Salon Shampoo, I showed the girl the pictures I had on my phone so she could see what it was I was after! I showed her the pictures you see to the left and below, right.

She took one look at them, and told me I was nuts. I pretty much laughed flat out in her face. Hair grows!! And anyhow, I'm a paying customer, I expect to get what I ask for! 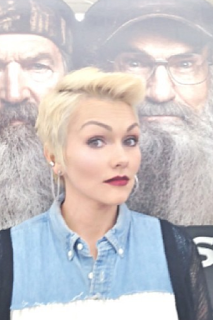 She excused herself and got a fellow stylist to come out and have a look at me, and my pictures too. This new stylist was far more into what I wanted! I was delighted when she said she'd do it. The last thing I want is to be made second guess myself when I am excited for a big change. Frankly, change usually scares the bejesus out of me, and when I'm as pumped for it as I was on Tuesday, I really don't need to be judged and questioned.

She combed my hair out, checked and rechecked the pictures and thoroughly explained what she would be doing to make sure it suited me perfectly, and then as she clipped up my hair, combed out a section at the back, and looked at me dead in the eye (through the mirror), she asked me, her tone utterly serious, "Are you sure this is what you want??"...

I had the biggest smile on my face as I replied to her with an unerringly clear "Yes!", and she got right down to it!

An hour later, the floor around my chair was completely ginger! I must have weighed at least a pound lighter and I was thrilled!

My lovely stylist was delighted at how happy I was and I think she knew in her heart that I really did need the change! She blow-dried my newly cropped hair, all the while saying "Gosh its so different, you look brilliant" etc, etc. 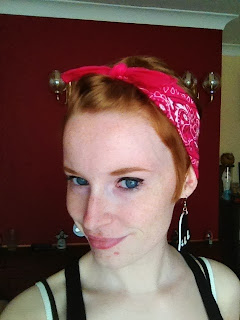 She put some product in my hair, and this really is the only bit I had an issue with. She told me it was matte. It was the shiniest gel on the face of this planet, actually!

When I was paying at the counter, I made a point of asking the girl who was originally meant to be my stylist what she thought. She conceded that I looked good, but I was still mental. Well, I am mental, but that's not for a stranger to point out to me!

So when I got home I jumped straight in the shower to wash the gel out, and wash all the stray hairs off my back!!

When I hopped out of my shower, dried my hair again, and pouffed it up the way I wanted it (with actual matte Fructis styling clay) I was somehow even more thrilled! Like a complete loser I went looking for my hot pink bandana so I could tie it in my hair a la Kandee!

T
To all the girls out there who want to change their hair, I want you to go out and do it! Even if you only like it for a week and then decided it was the worst choice ever, HAIR GROWS!!!

I for one absolutely love my new look, I have never felt sexier or more confident in my life, and I am glad to say that my amazing boyfriend still finds me sexy and attractive too! People have been complimenting me all week, including one woman telling me I looked "sexy as hell", and another saying "Jesus I didn't know who it was for the minute!!"

Feeling confident in my own skin, and under my new hair has helped me to ooze sex-appeal like I never knew I could! Who says you have to have long hair to be gorgeous? Kandee Johnson certainly doesn't, and neither do I!

Go for it, gorgeous, make that change, whether its dying your hair a crazy colour, going blonde, getting the chop or whatever! I know you can rock it!!

Thank you for commenting, I really appreciate it, and will always try to reply to you! You can always tweet me for the banter, too @redlips_redhair...