Most of the time I can brush things off. I am pretty much a pro when it comes to just going with the flow and letting the good times roll, as well as having the chips fall where they may. This week however, was pretty much 90% crap on a twig.

On Saturday we found out that a good friend of my parents and uncle passed away from what we believe to be a heart attack, then on Sunday I was told that a girl I knew (though admittedly she was a lot older than I am) had committed suicide.

As if those two weren't bad enough together, I rolled into college on Monday morning (3 hours early for a 2pm Kitchen Session) to find my locker had been broken into and my chefs whites taken. I cried at the top of the stairs for a good 15 minutes before one of the mature students from my course, Angela found me and comforted me til I was calm. Then I had to go and find the Dept Head, the Course Head, and file a report with the porters, before I made my way over the the Linen Stores for a new uniform.

I had intended on going to college early to leave my stuff, go get a bite and then stake out the library to get my KS prep done. No such luck. the lecturer was quite understanding and she let me off free and easy since it had been an awful day. That was really nice of her and I was grateful as heck!

When I got onto the bus at 6 to head home, after the worst Monday in at least a year, I got a text from Chris asking me to ring him. He informed me through his tears that his goldfish was dying. Fish is okay now, thankfully, he seems to have made a miraculous recovery.

Tuesday rolled around and I was delighted because that meant I was doing lunch with my very good friend Kerrie! We strolled around the the bus stop in the middle of Maynooth town, and hopped on the 66, heading to the Big Smoke! Everything was great, we had a brilliant lunch and a few cocktails in Cafe en Seine, then we hopped on the bus back to O'Connell St to meet Chris at the Luas stop. Kerrie headed for Tallaght, Chris and I for Drumcondra. There I was informed by another friend that a good friend of mine had suffered the passing of his beautiful Bernese Mountain Dog and I honestly had to mentally scold myself for crying in public twice in a week. I had a ferocious headache so I met my friend Aine for coffee and then went home. When I met my mum in Maynooth to come all the way home, she then informed me that Dad had decided to take the dog for a walk and a swim in the canal, and he had stumbled, and fallen in too. He went under twice but managed to get himself out. God knows how, the man has an awful bad heart, but still he made it home, the half mile walk from the Royal Canal to our house, drenched but still alive and well.

I spent yesterday in bed with a headache and a pain in the right side of my face, in my jaw near my ear. 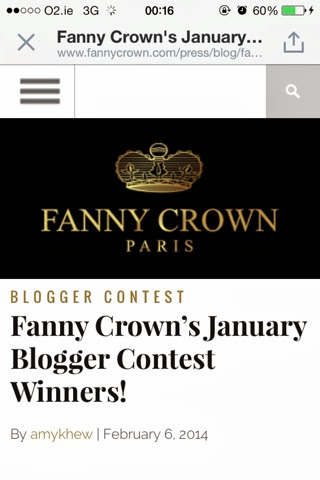 But today really made things so much better. Fanny Crown held a competition last month and today the winners were announced. I feel awful though for ringing Kayliegh all excited telling her she had won because I was too excited to sit and read the announcement. It turned out she won second place and I won the grand prize. This week went from 90% bad, to 90% awesome in one fell swoop 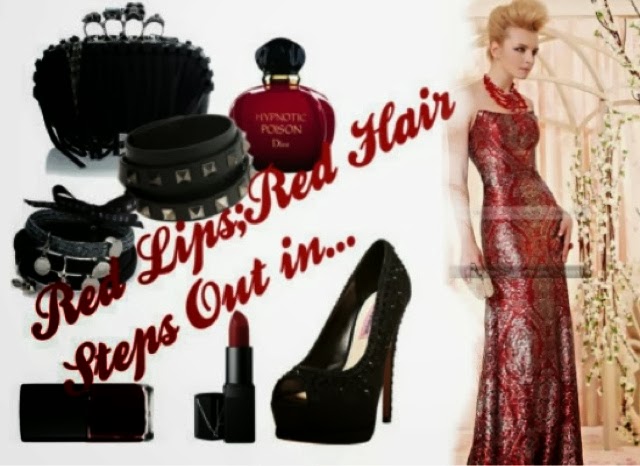 You can find my post HERE, and Kaylieghs HERE

Either way, I think we are both still delighted with our winnings and I know that I am over-the-moon with the way Karma has repaid me for the last few days.

Thank you so much, Fanny Crown, you guys really have made me so happy and I'm delighted to be your January Blog Competition winner!! :D

You can find all the links to Fanny Crown in either mine, or Kaylieghs post above!