Aaaaand it's February! Today I'm going to take you through what I've been adoring and what I've found boring! 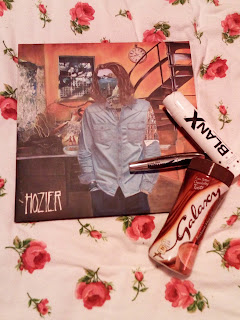 I've been adoring my Blanx Whitening Toothpaste*. Now I must admit right off the bat I don't know if it's whitening, but it's made my teeth feel so lovely and clean without being insanely minty. I'm just so taken by it. I find myself constantly running my tongue over my teeth for half the morning, probably looking like a tool bag in the process, lets be honest! It's just great, and it's not a stupid squeezy tube it's one you press the button and the toothpase just comes out like magic. A-dore!!!

Galaxy Hot Chocolate. Dealz is a great place to find this stuff, this creamy, chocolatey, wonderful treat. You put three or four teaspoons into a cup and pour over boiling water. That's probably why I like it so much. I'm lactose intolerant and I'm not really meant to have stuff like this but with Galaxy Hot Chocolate, I find I can get away without any migraines or tummyaches. Winner winner!!

Hozier. Lord above will I ever not be enraptured by this man and the talent he possesses? I've literally been listening to his album on repeat for months, and January was no different. I'm lucky enough to own his self titled album on vinyl, and it's sheer perfection. I've also got the album in my iPod and on my phone. I'm just obsessed. My current favorite track (though that fact is ever changing) is Work Song, which reminds me of my darling Dex. There's just no getting over this guy for me, Hozier just knows whats up and I could listen to his album every day til I die and still get something new from each song. Literally cannot get enough of it.


Catrice Better Than False Lashes Mascara. I bought this in a pinch, somehow I managed to leave the house without mascara on and I have to duck into a chemist to get something to fill the gap. This was on the catrice stand and I just went for it. There was no deliberating, it was the first one that came to my hand. It's actually great though, the wand is huge but not super bristly so you can go through in two or three swipes to catch all your lashes and avoid the spidery clumpy look we all know isnt cute. I didn't think I would but I very much like this mascara - so much so it's in my travel make up kit permanently.


So there you have it, a little chat about stuff I've been digging this month. If you want, I could try to mention some stuff I have been less than impressed by. Let me know!!