Last year, I was lucky enough to be afford the opportunity to work with the English company, Specs Post. Specs Post are an online store that sell high quality frames at a low cost. I of course, being short sighted, was thrilled to get the chance to pick some frames and review the store. Since then, almost one year later, I'm back on the wagon. No, I've not gotten to work alongside them again, but I'm going to let you know how I got on with the frames I chose.

I picked from four frames, though three were in the running from the day they arrived for me to see, and eventually, with the help of friends, family, social media, my boss at the time, and my ex, I opted for the Park Lane style frame. I always liked acetate or plastic frames, because they're tough and I'm clumsy. I also loathe nosepads, and plastic frames don't have them. Generally speaking, plastic frames are the bomb diggity!

My Park Lane frames came to me with my scrip in them, and in a lovely case. Now, I wear my specs pretty much every day, unless I'm wearing lenses. For that reason, I never really have them in the case, so the case Specs Post sent me the frames in has managed to get lost. If I wear my frames, when I go to bed, they sit on my bedside table, and I rarely fold them up. They get folded up and put in my Penneys case if they're coming with me, like to my boyfriends house, overseas or even just in my handbag. When they go into that case, they share it with my lens pots. 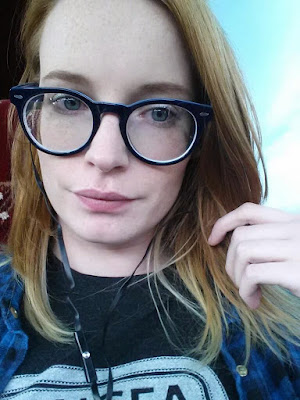 So how did I get on?

Well, in 12 months, I haven't broken them, though I've dropped them, sat on them, had them slip off at work, and even managed to fall asleep with them on a few times. They've never needed to be repaired by my local optician, they've no scratches or signs of wear, they've only needed the arms tightened once, and they've always gotten compliments. 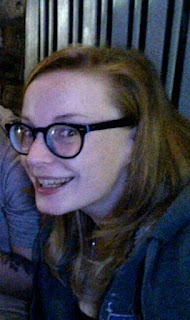 In fact, the only bad thing that ever happened, was I forgot them once on an impromptu overnight stay in my boyfriends house, and had a hiccup with my lenses which meant I had to get home from South County Dublin to my home (two hours, two kinds of public transport) with horrible, blurry vision the next day. I learned my lesson, they come everywhere with me now, if I might even possibly be staying out.

Honestly, these frames are possibly my favorite pair I've had since I started wearing glasses almost 14 years ago, and that's a big statement, considering my penchant for specs in general! I love the plastic frame, the deep navy and turquoise accent, the rounded shape with the horn rim, the silver detail, everything. They've never hurt my head, which I cannot say for other frames I've had through the years, a trait which seems to be common in other plastic frames.

I can tell you right here and now that I'm due an eye test in April, and I will be using Specs Post again. I've even picked out the frame and everything!!